How does CBD work?

CBD works by interacting with your body’s Endocannabinoid System (ECS). The ECS is one the body’s regulatory systems and has CB receptors on our body’s cell surfaces; CB1 receptors are essential for healthy brain function, and CB2 receptors are found on the cells of our immune system. 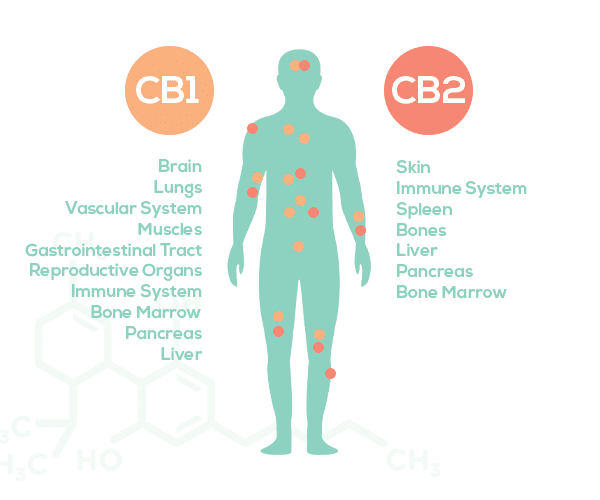 Cannabinoids are complex chemical compounds that act on receptors in cells. Similar to the hemp plant, which produces over 100 different cannabinoids (or phytocannabinoids), the mammalian body also naturally produces cannabinoids (or endocannabinoids). Within each and every mammal exists an Endocannabinoid System (ECS), which is comprised of a series of receptors with the sole purpose of accepting cannabinoids throughout the body. The ECS is responsible for physiological processes such as appetite, pain-sensation, mood and memory, and despite the multitude of functions performed in each area of the body, the primary objective of the ECS is always the same – homeostasis, as it is quite literally the bridge between the body and our mind.

Most interestingly, the ECS is not just affected by endocannabinoids (cannabinoids created by the human body), but it is also affected by plant-sourced cannabinoids, like THC and CBD. Of the 113 different cannabinoids found in the hemp plant, the two most prominent are tetrahydrocannabinol (THC) and cannabidiol (CBD). Although THC is easily the most popular cannabinoid due to its psychoactive effects, which result in the user feeling “ high ”, CBD has gained traction due to its non-psychoactive, therapeutic effects. When we inhale or ingest phytocannabinoids (like CBD and THC) along with other plant-based molecules (like terpenes and flavonoids), there is a synergistic effect, resulting in enhanced, therapeutic benefits.

The ECS is comprised to two primary endocannabinoid receptors: CB1 (found predominantly in the brain, nervous system, and outlying organs and tissues) and CB2 (found predominantly in white blood cells, tonsils and spleen). Although CBD has low affinity for either of these receptors, it does interact with other nominal receptors with remarkable effects. For example, CBD activates the receptor GPR55, which has been shown to assist in treating pain and inflammation. CBD has also been shown as a partial agonist to the 5-HT1A receptor, which may lead to cannabidiol’s antidepressant, anti-anxiety, and neuroprotective effects.

The discovery of receptors in the brain that respond pharmacologically to cannabis—and the subsequent identification of endogenous cannabinoid compounds in our own bodies that bind to these receptors—has significantly advanced our understanding of human biology, health, and disease.